Max is having a good time, it’s his local circuit and the marshals and ‘crowd’ love him! There is no pressure, and if I were him I’d assume the team rookie has just had a bad experience warming up. It’s now time to make up some places. AND THEY ARE OFF! Except we’re not. Max gets passed by 3-4 cars coming out of Chicane. He comes into the pits and the team change the coil packs and send him out again. He’s back, it’s even worse. The team are working flat out and I keep well back. Kurt is doing a great job of listening to my verbal diarrhoea. Somehow, someone thinks to check the earth strap and it’s loose! Tightened and Max is off. We’re now dead last, 34th, 5 laps down, which equates to 6-7 once the out-lap is complete, and Max goes on a charge. I’d love to tell you more about this, but it’s this moment that all of it begins to dawn on me. I blink and Mark is in the car and off.

Max’s parents are very sweet. Kurt and I talk with them on the pit wall, and by talk I mean I talk lots. Max’s parents find my situation hilarious and are nicely supportive, explaining where they expect to see me follow their son and Mark’s examples of brave overtakes. I experiment with trying to get my HANS on with helmet attached. 99.99999% sure Kurt wants to laugh out loud watching me, an uncoordinated bag of nerves trying to fumble it all together. Kurt does a sterling job of holding the laughter in. It doesn’t work and I retreat to the garage to get suited properly. Then I’m stood by the car and it’s being refuelled. 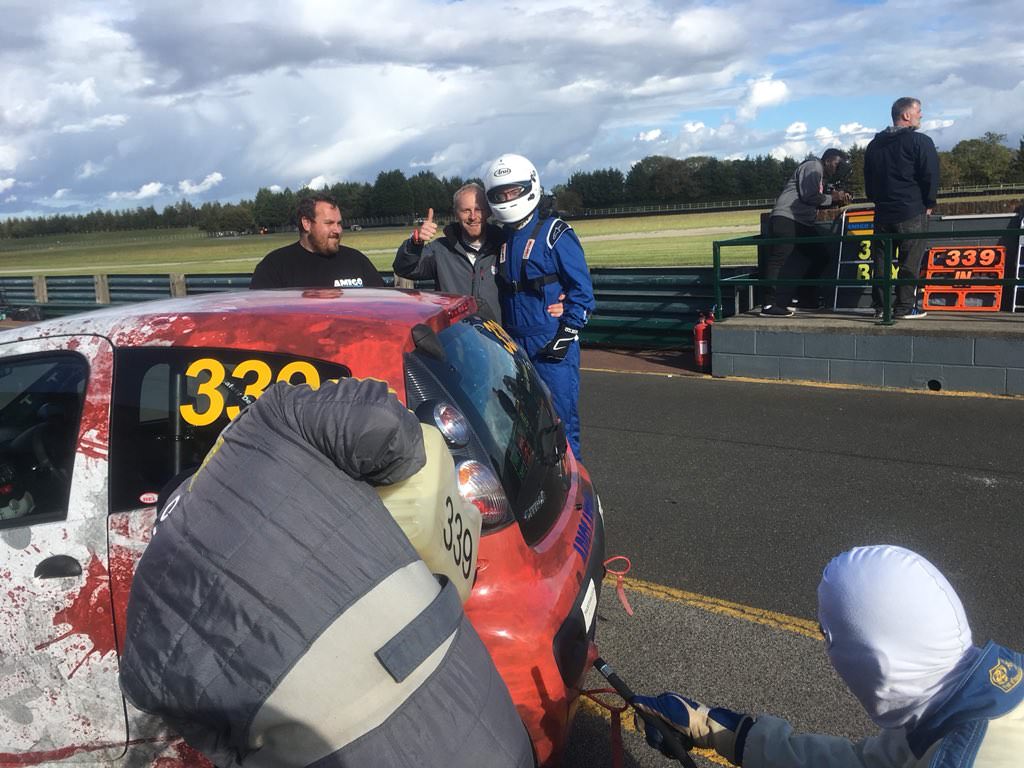 Up to this point, it’s been mostly dry and sunny. Max tells me to enjoy it and if it rains watch out for Corner 2 and Tower. The rest of the track will be slippery, just mind how I go and get at it. That’s it, the team strap me in #339 and away I go, via the tag system. This time using first instead of my previous third-stalling-starter-motor strategy. 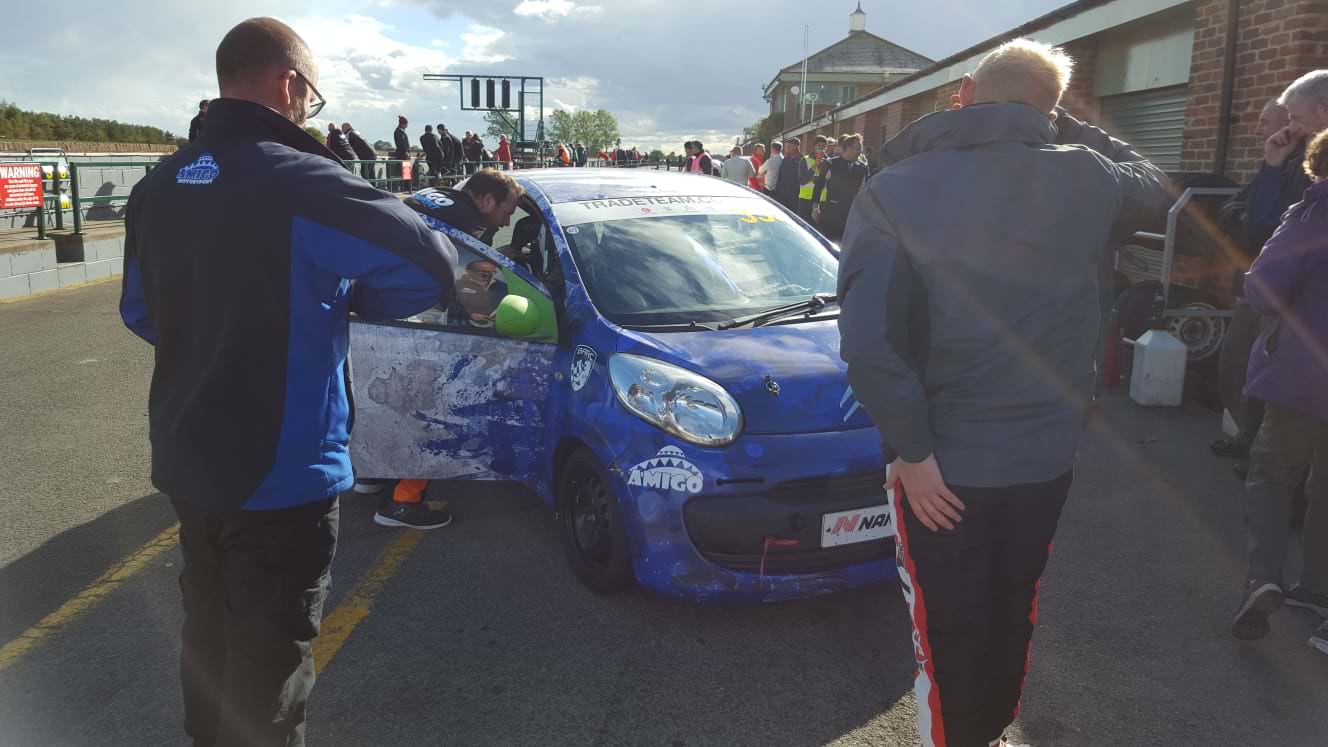 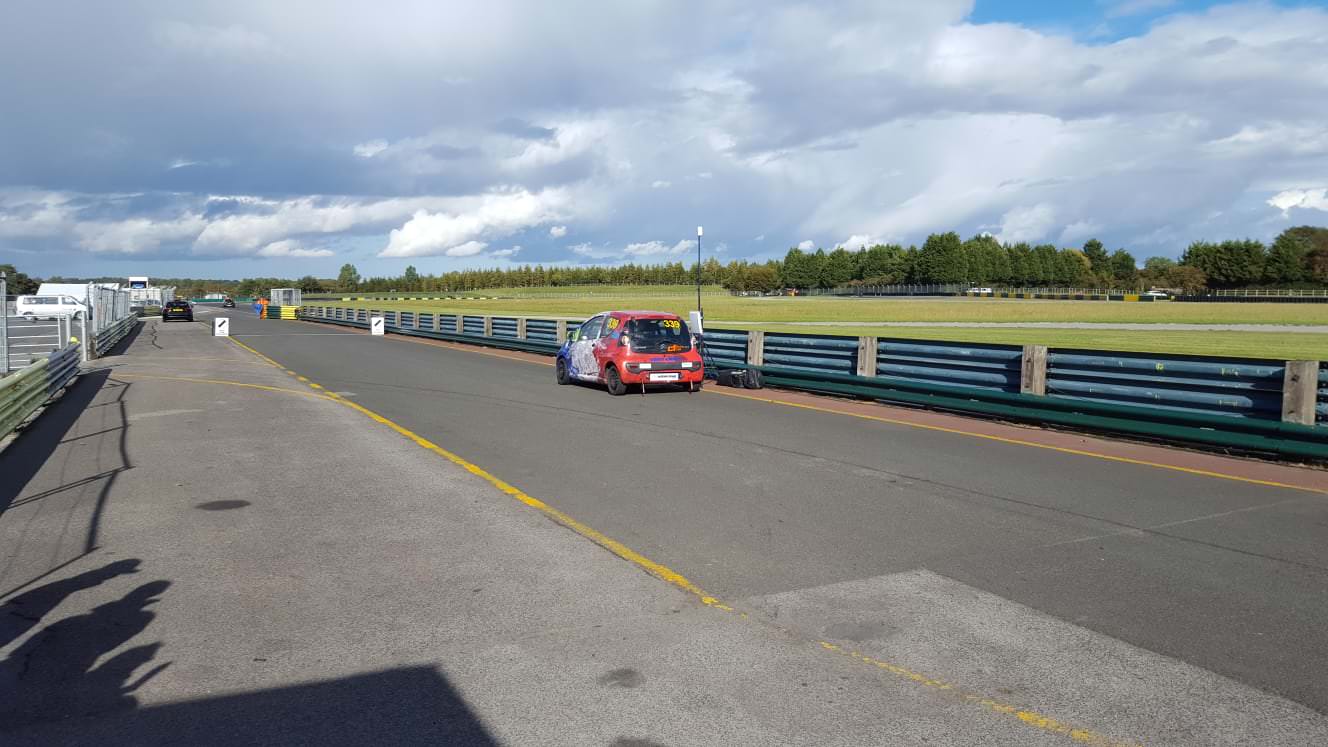 Lots of drivers were quicker than me and a few weren’t. The opportunity for my first overtake presented itself in the form of a red c1 that was marginally quicker in a straight line but slower through the corners. Over two laps I start to reel him in. As we exit Corner 2, I’m in second and going for it up the inside. My nose is in line with his door, and he comes across to defend. Leaving me the choice of crash or back out of it. I wasn’t close enough to try it and I didn’t commit enough. I stay glued to his bumper through the Chicane and on to Tower. Through Tower he holds me up and I get a run on him into the Esses. Not enough of a run to draw level. Same again, he comes across and I have to back out, take to the grass, or we collide. I get straight back on his bumper and am rewarded at Sunnys when he out brakes himself and the opportunity presents itself to take him on the inside. Thanks to Max’s coaching I’m in early and then keep him on the outside of me as I maintain as much momentum as possible and exit Sunnys. Woooooooo HOOOOOOOOOOOOOOOOOOOOOO, my first real overtake. 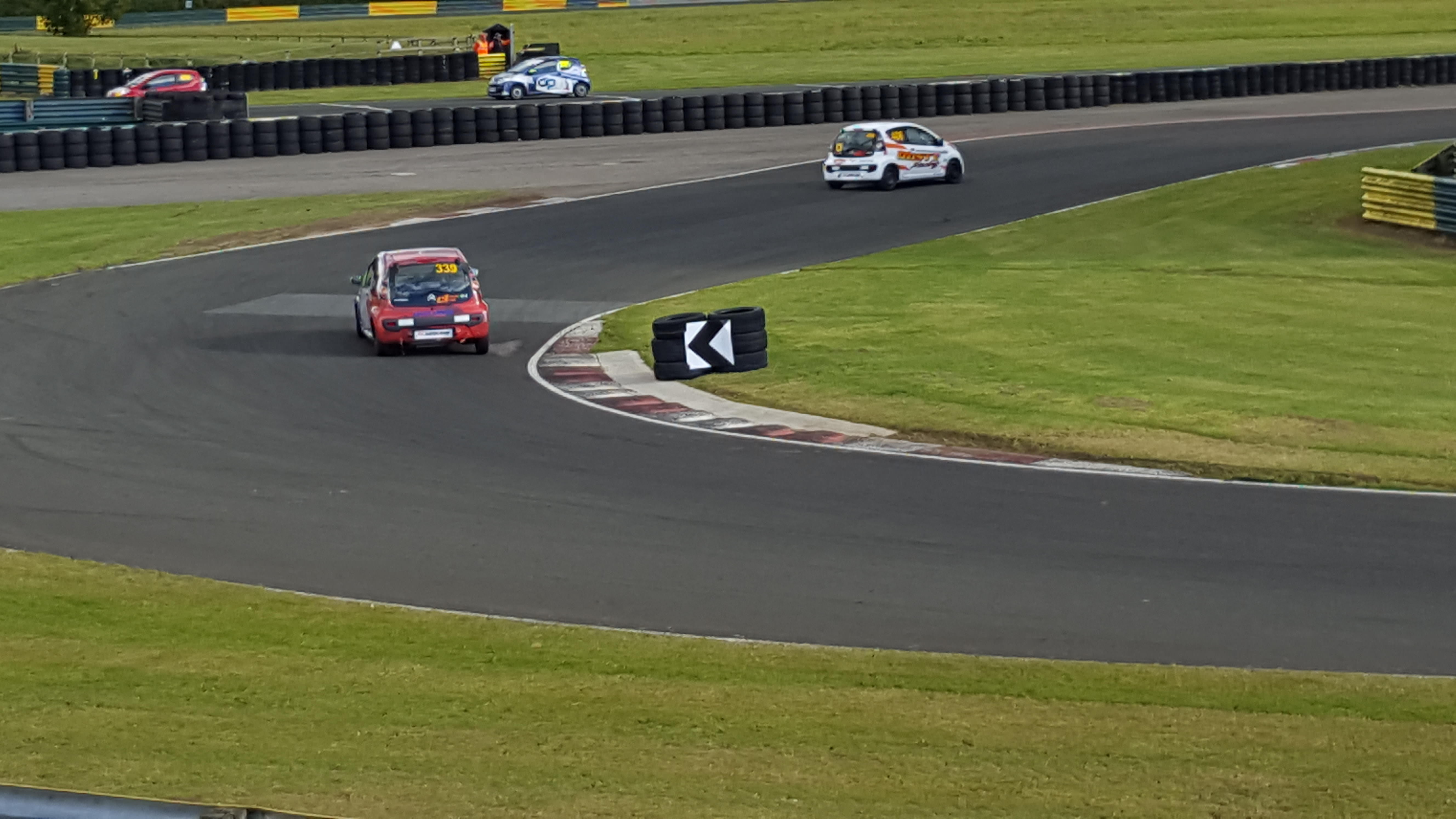 A few more occurred with people out-braking themselves, getting a wobble on, or making a mistake. Especially in Turn 2, Tower, and Sunnys. In a one-make series I guess, unless you have a serious talent/speed difference, that’s how most overtakes go. Thanks to Max’s coaching I do OK and hold my own. Thanks also to Dale’s coaching/idea (and doing lots of track days in MX5s), a few times I jumped on the back of a faster car pushing its way through and got through as well. 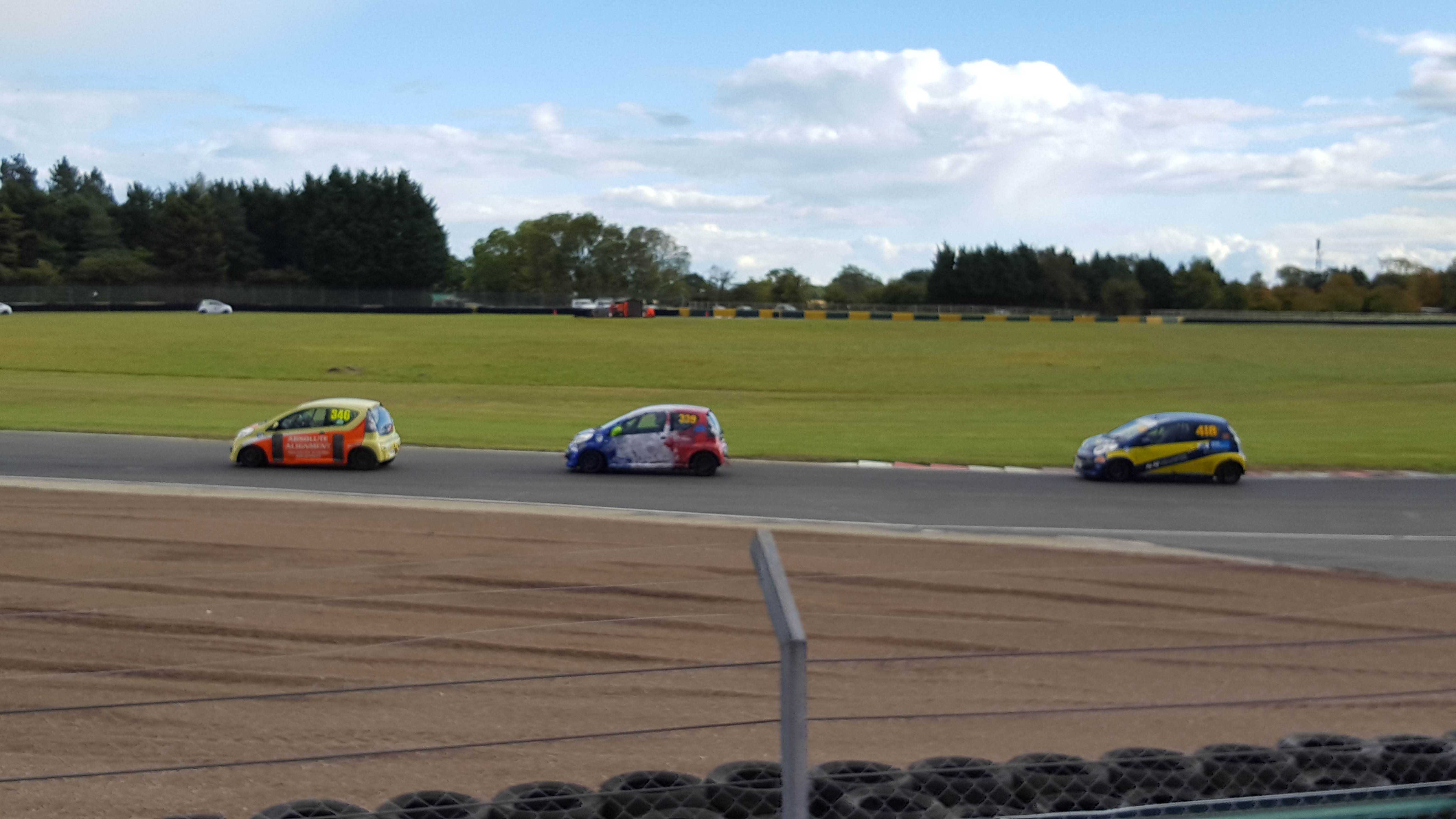 Where possible I did my best to get out of the way of my teammates, 385 and 381. The other people I tried to be respectful, give as little space as I could, and not be jumpy. This is obviously a big difference vs. track days, I think I did OK. In all honesty, I didn’t think about it outside of JFDI. Being surrounded by a gaggle of C1s, some of which are trying to pass you, some of which you are trying to pass, doesn’t leave a lot of mental bandwidth for considering other things. Then it all went a bit dark… 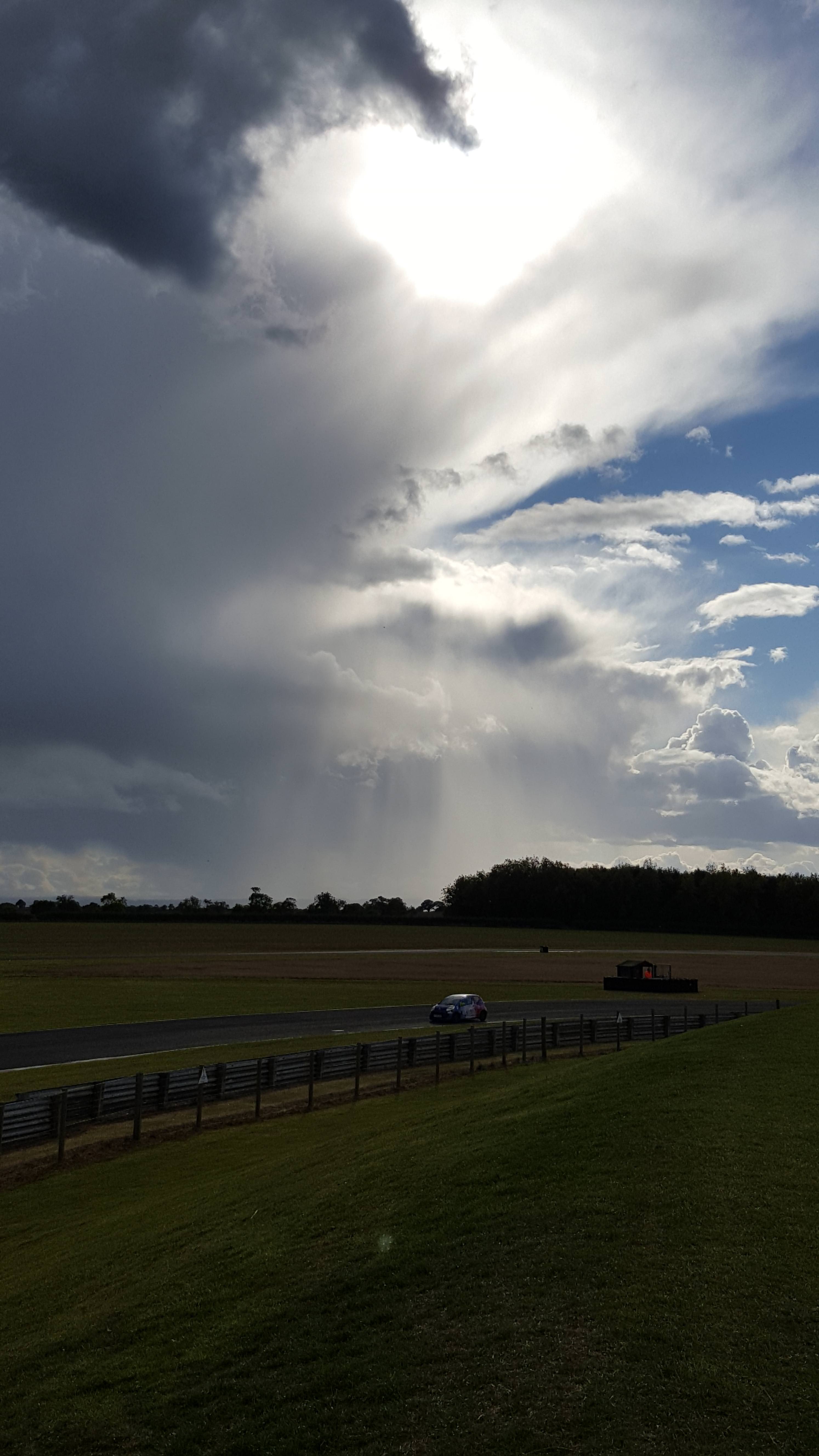 It had been spitting a bit, on and off light rain. The safety car came out for the second time in my stint and I could see the weather looked ominous. The light rain made things greasy but it didn’t slow anything down. I was convinced the team would bring me in as I’d been out nearly an hour by this point. The safety car came in, racing resumed and a few laps later as I came down the start-finish straight all hell let loose. I thought it was just heavy rain, apparently, it was hail. None of this really registered beyond it got slippery fast. Remembering Max’s advice I was hesitant into Corner 2 and so glad I was. There was 0 grip and the car moved 2-3 cars width across, with a ’neat’ four-wheel slide. I could see cars spinning and going off in front of me. One car even missed Chicane. Coming out of Chicane I actually passed a couple of cars and with a flurry of smooth hand movements (if that’s not an oxymoron) I held on through Tower and up the Esses as more cars explored track limits and 360s. I found the light switch and wipers and settled in. As the rain eased things got easier and grippier again. Another safety car, a few more laps, and the board came out. That was it, I’d done it! An incident and spin free stint in my first ever race.

* Croft is really far from Cornwall.
* C1 racing is something I NEED to do more of.
* Max Coates = awesome.

The above contains prattle, waffle, exaggeration, missed memories, and nowhere near enough emotion to convey to Rich and Mark how grateful I am for the opportunity (and to all of the others that helped me get to this point). Thank you all. It’s hard to convey exactly how much it means to me. I’ll always remember the Italian Job Top Gear DVD (geek points), were Jeremy Clarkson finishes his first ever race and is just a mess. That was me. Mark and Max got hugged to within an inch of their lives. I’ve gone overboard typing as I hope I can read this with mini-me one day, so she can start to share in what I hope is a long continuing hobby. And, I hope you’ve all enjoyed parts of it too. Thanks for reading,

2 thoughts on “My First Race”